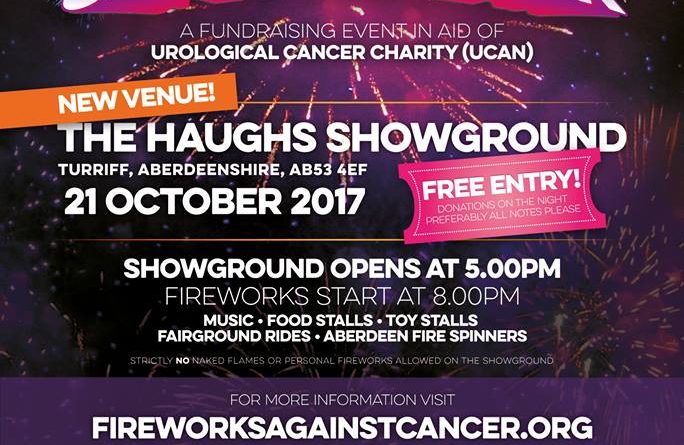 Fireworks Against Cancer in Support of UCAN’s firework Son et Lumière spectacular took place on Saturday last, the 21st October at the new regular venue of The Haughs Turriff.

The skies were lit up by a dazzling display of firework artistry from Fireworx Scotland, accompanied by super audio tracks, including Shine on you Crazy Diamond by Pink Floyd. Supporting the event were the Aberdeen University Circus Troupe who gave a stunning display of fire eating & juggling and on stage, the event was hosted by Ronnie (Feel Good) Arthur from Buchan Radio, with great live sets from local Ellon singer the talented Amanda Penny.

Fairground rides & food stalls were on hand to keep the crowds entertained & sustained in the run up to the main event and Local crews from the Turriff Fire brigade were kept busy with youngsters experiencing being a fire fighter at the on duty fire tender for the night.

David Dent, executive Director of UCAN, based at ARI addressed the gathering with details of local cancer charity UCAN’s plans for expansion of their unique services to urological patients & their families in the region, thanking everyone who donated to this worthy cause.

The Fireworks Against Cancer team, comprising John & Anna Burdon & Gavin & Katrina Reid said “the event was a great success, raising over £6,100 with donations still to come in and thanked the sponsors & myriad of helpers who made the event possible. The team also added that due to licensing delays they had less than the usual time to organise it, but the whole community rallied & with help from several members of The Turriff Business Association, the Aberdeenshire Council Parks team & support from the Turriff Show Committee, the event went ahead on time & exactly as planned. Dedicated to the cause, Katrina has for the last three years been growing her hair & immediately after the event had it cut off & sent to The Little Princess Trust for use in wigs for children dealing with Cancer, with sponsorship monies added to the UCAN bucket!”

The team added “Anyone who watched the display over the skies of Turriff from the comfort of their homes are welcome to make a donation to UCAN at Just Giving- Fireworks Against Cancer. Next year’s event planning is already under way with plans to expand the pre show entertainment & activities during the day. Full details of Fireworks Against Cancer in support of UCAN 2018 and anyone wishing to help with sponsorship packages can contact the team at www.fireworksagainstcancer.org”

A firework spectacular in Turriff is aiming to raise funds for UCAN.

A fireworks display by Son & Lumiere will take place on the 21st October alongside fairground rides, fire juggling with the Aberdeen University Circus Troup, tombola, food stalls & music. The evening will be hosted by Buchan Community Radio plus a mystery guest!

Please go to their Facebook page for more information and to see a promo video:

or read more at the Evening Express 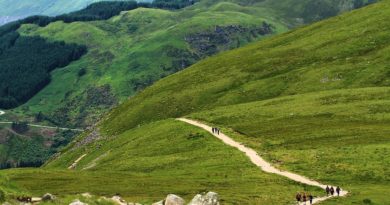 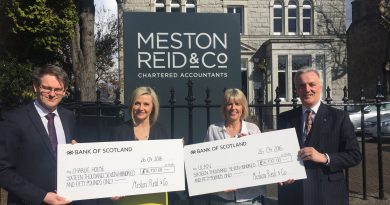 15th June 2016 Moderator Comments Off on Thank you Meston Reid 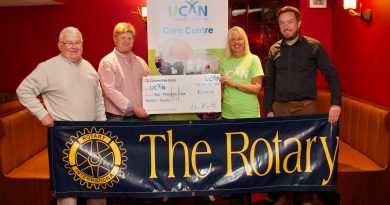