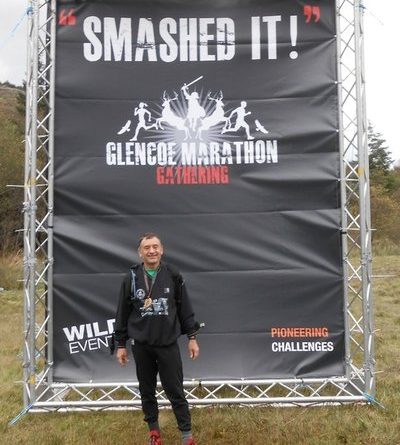 It now seems a long time since those 1st steps taken round the urological ward of ARI, following my Laparoscopic radical prostatectomy early in January 2014. The first few times following the footprints round the ward felt like I had competed in a marathon. Resting in bed after those steps I resolved to recover my fitness and run a real marathon, not just the flat street race, but undertake Britain’s toughest marathon across the Hills. This is the story of my challenge on October the 5th 2014. I hope it inspires anyone who is recovering from surgery, or contemplating surgery that we can recover, and even be stronger following the treatment for cancer.

It is now October the 4th and I am repacking my rucksack bag for the about the 4th time. Thoughts of is it too heavy have I got all the energy bars, copies of entry paper work, spare clothes, essential 1st aid that might need etc. What happens if I go of course? Do I extra need a batteries for my torch? How will I get back if I do not finish before the last bus? The anticipatory anxiety was now fully kicking in, more options rather than decisions were presenting themselves. In the end I opted for my running rucksack, spare bag with change of clothes, clothing for 2 nights overnight stay + provisions of food for 3 days. I placed all this gear in the car, kissed goodbye to Suzy and Callum and set of for the 4 hour drive. I now had time to reflect on the past 9 months and past challenges that I had undertaken before the cancer surgery. The autumn weather season had suddenly arrived with the trees splendid in there golden glory, the drive was particularly scenic, reliving pleasant memories of previous running events around Aviemore and Fort William.

Arriving at the registration tent set up in Glen Nevis it seemed almost deserted I had expected a considerable number for the marathon and although it was only ½ hour after opening few runners seemed to be present. Registration was very simple find your name there is the allocated number go to desk issued with number and timing chip for shoe. Yes there will be a baggage bus, yes there will be a time limit after which time runners will not be allowed to proceed past the ½ way point, and the final tent will close at 19:00. Easy then 10 hours to complete 26 miles and 1608m up ascent and about the same in descent you could walk it! We are talking about the last stages of the famous West highland way close to 20 miles on hard rocky trails, 5 miles through a muddy boggy and just over a mile of road the rest all in the mountains. This event is described as the Britain’s toughest marathon, and I am running in it tomorrow. No excuses, this is it the time to put myself to the test.

I had decided to stay close to the start at the red squirrel campsite in Glencoe. Luckily had managed to book a bed in SYA hostel, and drove round to the hostel to book in. Very few other walkers or runners had yet arrived so far I was the only person in the room. I selected the bed furthest from door as I thought less likely to be disturbed and after more fiddling about with bags and rucksack decided to go for a warm up jog. Late afternoon sun shining on mountains, it was a very pleasant undulating run down to the start location, nothing yet set up. Then followed the trail route part of the way along the muddy track by the A82. Took a few photos of the mountains in the setting sun and headed back. It seemed a good time to eat so dropped in at Clachaig inn for dinner and a few different beers. Normally not recommended but I find it helpful to get a good nights rest and as beer is 95% water helps with the hydration. Leaving about 20:00 it was now pitch black so ran quickly up the path in the dark why did I not take my head torch with me because it’s at the bottom of my packed bag!

Returning relaxed to the hostel a scene of frantic activity was in session with a numbers of runners discussing strategies, concerns on finishes times, equipment, level of training, food and ability to complete the course a lot seemed quite nervous, apart from some obvious confident souls who had done this wearing shirts emblazed with several other major marathons or Ultras as well! I felt a bit encouraged that I was not the only person entering this event who was unsure of their endurance ability and although they seemed to have done more training than I had, my self-confidence started to return. Here I was, now aged 61 tackling an event that would test many 30 year olds. I turned in early and settled into a good sleep.

If you are unlucky, there will always be one or more persons in a shared room who cannot help but make noise and tonight we had Mr Engles from Norway. Late in around 23:00 he falls about climbing the bunk, as soon as he is in the bunk, he is down again then up and rustling as he is trying to make the bed up, find something in the dark or whatever. Wish I had remembered eye mask and ear plugs, eventually the room quietened and I fall back to sleep. 03:45 he is up toilet break! Of course now I have to go as well. Then he is up again rustling, up down in and out of room eventually at 05:45 I get up no point sleeping any more wide awake so got some breakfast and there he is drinking a bottle of beer! Yes he spotted me and as the only other person in the dining room I am forced to engage in conversation. I thought he was a very strange man. He kept going outside and then back and asking weird questions. Well at least he was not running in the marathon he must have thought that I was just as odd. Anyway an early start and not wanting to return to my room before 08:00 to avoid waking up the others meant that I had an early breakfast, as other runners turned up most were in that focused solitary zone and conversation was limited. No time left now to stress about kit etc. just put it on and walk to the start. Weather outside was damp and slight drizzle it did not seem cold and no significant wind. I elected to run in normal long sleeved shirt with heavier short sleeve shirt over and long pants. Waterproofs and thermal layer in ruck sack.

08:30 Red Squirrel campsite a hive of activity close to 800 runners so I was told milling about, only felt like a 500 or so. As we are all wearing timing chips on our shoes, to avoid congestion on the narrow paths we are to be started in waves, those god like runners sub 4 hours will go first, followed in 5 minutes by fast runners, then 10 minutes average runners and 15 minutes later the last wave, myself and the rest of the pack competing just to finish. It felt good to be starting a race in group of elite runners all who seemed were accomplished marathoners, and despite my lack of distance, training, It felt I had earned the right to be here. This is it my goal, no more training runs, no more self-doubt, this is the real thing, my ultimate test and I felt good. The weather was really overcast, mountain tops covered with cloud, but no significant wind good to be running conditions. Although rain and high winds were predicted.

Waiting with the runners at the back there was lots of mutual encouragement and good wishes shared between us and then suddenly we were over the line and off, proceeding slowly in a pack spread across the road. Off course just after we started cars and minibuses also wanted to pass down the single track road so we all had to move on the verges to let them pass through. Cheers and waves as we passed the Clachaig and then down to A82 crossing. Marshalls were carefully guiding us across and then we were off on to the muddy track. It was a lot more churned up now probably 700 in front and 100 behind as track narrow it is not really possible to pass so we are like a giant multi-coloured caterpillar of runners stretched out as far down the track as you can see.

It’s been over an hour since I have finished so think about finding the bus that is returning to the start. It’s now starting to rain moderately and I am feel cold. Luckily the bus just comes and I get on it and sit down. With other competitors we exchange our stories, I call Suzy and Callum at home to let them know I have finished and my time. Back to the hostel shower I change and still have legs to walk the mile to the Clachaig for a celebratory big meal, quite a few beers, chat with the other finishers, what a great day I well pleased with myself!

Prior to starting the event, I said that my aims were:

Of course during the event the time and position became important, 1st not to miss the cut off point, 2nd not to miss the bus back to the start point and 3rd not to be last competitor to finish. The most important thing was that I enjoyed the event, felt good about my performance that I overcame adversity and managed to raise awareness and funds for UCAN and the Northern Lights project. Would I do the race again, I don’t think so, I have nothing to prove. I am sure l will travel over this trail again for pleasure, without the pressure of a race, maybe stop at places to take photos and remember the day that I ran with the elite hill runners. There are other challenges that are waiting for me.

For the record I was placed 352 out of the 417 male & female competitors finishers listed!

My o fficial time printed out on the day has been recorded as 6:21:51. This was probably to do with the wave start time. It was a bit chaotic, back at the start point as I recall. I am placed in the over 60 age group of which there were eleven competitors of either gender and I was 7th in that group. Not bad considering I only started running properly in April.

For information on the Glencoe Marathon see the following link: http://glencoemarathon.co.uk/ For photos of the event, I am afraid none of then caught me, I must have been going too fast but at least they show the fantastic scenery and some of the other competitors:https://www.flickr.com/photos/wildfoxevents/sets/72157648042446379/

Friends, family and colleagues have all sponsored me by donating to UCAN for funding the installation of the RASS in Aberdeen Royal Infirmary. I hope my event has raised £1500 to the £2.5 M appeal. I also am contributing to the Project Northern Lights’ youth development work in Scotland.

I would like to thank all those who have supported me in my recovery, and all those that have contributed to appeal. Most of all I would like to thank my wife Suzy for giving me the encouragement and time to train and make this challenge a reality. By undertaking event it has closed my story on recovery from Prostate Cancer. I hope this story inspires and helps others suffering or recovering from Cancer. 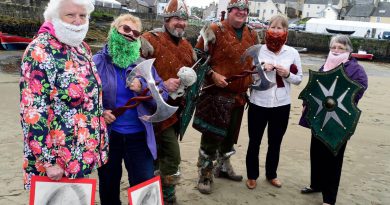 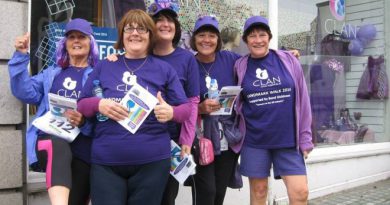